In the heart of our downtown, on the corner of the busiest intersection, is a vacant building with a large penis carved into the inches-thick dust caked onto its windows. 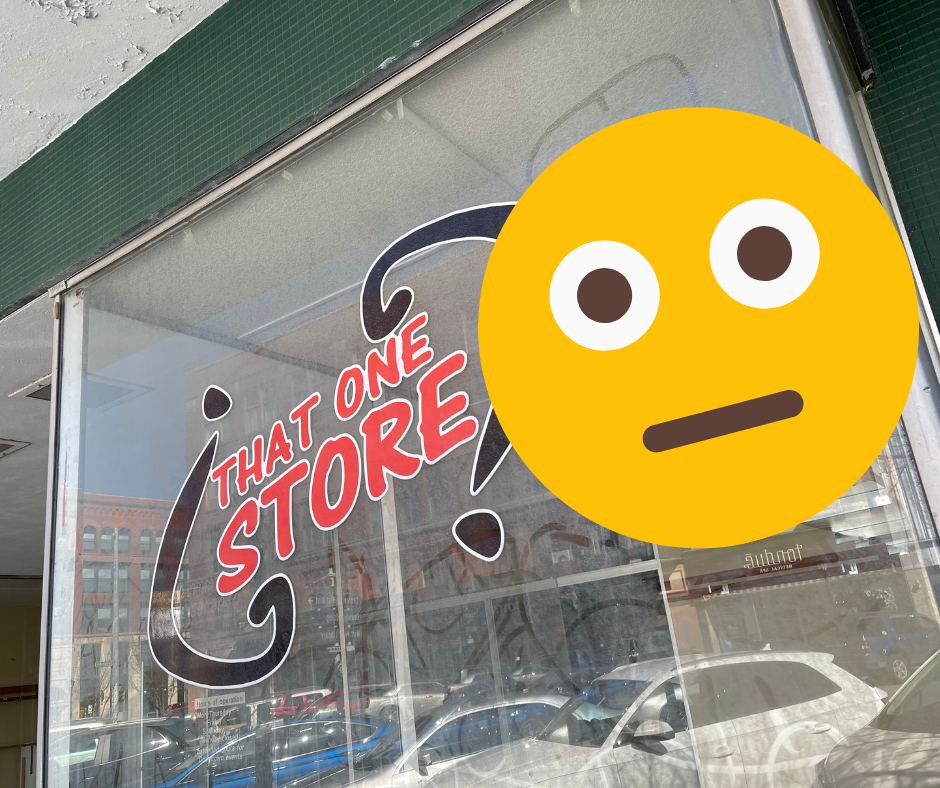 I don’t know what the building was at the beginning, but my most recent memory has it being a music store and then a short-lived thrift store. The thrift store closed three years ago, leaving the windows to only be washed by the occasional errant raindrop, giving neglect the time to create a public chalkboard made of dust and glass.

The Dusty Oracle of Downtown has been there for most of the three years, and in time, spawned many other, smaller brethren. Of course, there are other things drawn into the dust: every profane word (both spelled correctly and not), “BLM” written then crossed out then written again, declarations of love.

Never any “For Sale” or “For Lease” signs, just the dust and a large, phallic reminder of what the combination of apathy and chronically vacant properties do to our communities: teach everyone to care less.

We are the average of our place

The saying goes that we’re the average of the five people we spend the most time with. But what does the average of the 5 thousand, 50 thousand, or 500 thousand people we are surrounded by in our places make us?  What happens when every day we drive by beautiful buildings rotting from the inside out after decades of disuse and neglect to the point of being unsellable being listed for five times their worth? What happens when decade after decade, the windows stay broken, or in this case, dusty?

Despite community-focused efforts in any other area, we’re reminded, “There is nothing there.”

Despite new business coming in and new construction going up, entire blocks of a business district or neighborhood sit uninhabited for years with literally the same pieces of trash in the same places. We learn, “Progress isn’t for everyone.”

Despite growth and improvements, properties like this give infinite ammunition to the vocal minority (or majority) of nay-sayers, complainers, and yeah-but-ers who act as the de facto dead weights to anything positive trying to get the city off the ground.

Whether people are scared away by terrible and greedy landlords or by a community’s serious issues, chronically vacant properties desensitize us to the effects of apathy. Sooner or later, simply by repetition, we forget to care.

Chronically vacant properties are an insidious cancer, pockmarking communities while growing and spreading until tumors of disrepair seep and tumble into our brains because we are what we see every day and we are made from all the pieces of our places, broken windows and rotting wood and glass and trash and all.

And counter to our instinct, this “nothing” affects everything. Perhaps most serious of all, these countless empty buildings serve to disconnect us from our places and from a sense of pride in ourselves.

First, we abandon pride in our neighbors, saying with disgust, “Look at THAT terrible house.”

Next, we abandon pride in our city and disassociate from it, saying, “Look at THAT terrible city.”

And all along the way, the individuals in a community lose more and more pride in themselves.

In the movie Tolls — stay with me here —  Princess Poppy has to free her village from clutches of the monsters of Bergen Town. Throughout the movie, she’s relentlessly happy, pop-singing, and peppy (she’s the Troll princess, after all), but after a series of missteps, she turns to her friend, Branch, and says, “I’ve let everyone down.”

We see the colors drain out of her hair and skin. She turns completely grey and stares at the floor.

Princess Poppy was the glue holding the group together, so when the other trolls see the one who gave them purpose and motivation lose hope…they begin to lose hope as well, and they all turn grey.

In the face of malignant vacancy, our communities begin to turn grey, too, because emptiness limits our capacity. Even worse, a large portion of the population doesn’t even know it’s happening. The ceiling gets lower, the walls close in, and most people say it is what it is.

There are smarter people than I who can point you to specific strategies, codes, and actions that have helped communities like yours turn “what it is” into “what it can be”, so I’ll let them have those words.

But the words I will take will be about what has to happen before a community begins to address the issue of vacancies. We’ll call them the “Four A’s” because it sounds witty and official.

A year ago, a Pulitzer-prize winning journalist with the New York Times came to my area to write a piece about jobs, culture, and the looming election. She wrote, “Most of the stores in the Bay City mall have shuttered. Downtown is dotted with empty storefronts, between restaurants and condominiums that reflect budding efforts to remake the riverfront city into a destination.”

What she said is true. But the reaction in the community, especially among advocates for the city, largely focused on the phrase “dotted with empty storefronts” and the negative images that it carries.

“Dotted with empty storefronts,” she said.

“We have a growing downtown!” they said.

They’re both right. But until we get a critical mass of people to see and be aware of the scale and effects of vacancies in our communities, we can’t hope to change them. Our communities can’t fix a problem they don’t see as a problem (and one they can solve). Whether it’s smashing someone’s rose-colored glasses or inspiring them with the possibilities of these spaces, the more people that become aware that vacant property is a fundamental issue, the better. Heart bomb the buildings. If landlords are scaring people away, let them know. Talk to your city and ask them how they’re handling vacant properties.

After becoming aware of vacancies, we have to acknowledge how they affect our communities. Many times we assume the free market will take care of things – “Someone will buy it eventually” – or we’d just rather not wade into telling citizens what they should be doing with their property, because, after all, what harm is it really doing when it’s just sitting there? And in a sea of other, more immediately pressing problems?

But acknowledgment is awareness moving into a concrete thought: vacancies are a problem. You need numbers and facts: the downtown has ________ of vacancies with an average vacancy rate of ______ years. You need anecdotal evidence, i.e., “Why couldn’t I find affordable office space in a downtown that is mostly vacant?”

Acknowledgment is the part of story where chronically vacant properties move from only being an empty vacuum to having an actual footprint.

I was watching a self-defense instructor coach a group of women. He told them that many times when people are confronted with someone trying to commit an act of assault, they don’t put up much of a fight.

It wasn’t that the average person isn’t trained in self-defense, it’s because we’re trained to be nice. Yes, that nice, even to the point where we allow someone to cause us physical harm.

His solution? Get angry. He used the phrase, “You need to think, ‘How dare you? How dare you?!?”

How dare they, indeed.

How dare out-of-town property owners play our cities – our lives – like a stock market bet, buying up our neighborhoods and downtowns while they sit on a beach somewhere, hoping someone else makes something happen so they can profit?

How dare we as a community allow ourselves to not protect what we have?

Up until a few weeks ago, I would have just stopped with Three A’s, leaving everything on an angry note.

But then I heard Allison Quinlin of Flintlock Lab say that many times, owners of vacant properties really do love the community and want to contribute, they just may need some help. They’ve never done a renovation before or can’t find access to necessary capital. They’re too busy or may have bit off more than can chew, simply needing someone to come to them with a way out.

They may not need anger, they may need assistance. It would be easy to paint every vacant property as a villain, but that would be painting with too broad of a brush.

As busy people living in the tyranny of every moment, it’s easy to allow empty buildings quietly minding their own business to evade our consciousness.

But so much is at stake: our pride in ourselves and in our neighbors, in who we are, who we were and who we can be and in what WE can become.

Princess Poppy and the rest of her community turn completely grey, leaving Branch, typically the grumpiest troll in the bunch, as the only one with a chance at turning things around.

Up until this point, Branch has refused to sing in front of anyone, believing that his singing as a kid led to his grandmother being eaten by a Bergen.

But in this moment, it’s needed. He begins to sing Cyndi Lauper’s “True Colors”, and the color begins to return to Princess Poppy and the rest of the trolls.

There’s a line that says, “Don’t be discouraged, oh I realize / It’s hard to take courage”. It is hard to take courage, but that is what is needed in confronting the death-grip vacant properties have on many of our cities: an active conviction that your community is too important and precious to be held captive.

Phil Eich is the founder of Storyville Social, a marketing agency that uses writing, photography, videography, and podcasting to create story-centered marketing for cities.